The final stop before the Sierra’s is Kennedy Meadows. From this point on the trail changes drastically. After arriving, I went to pick up the boxes I had shipped to myself and a box my family had shipped. In the four boxes was an ice axe, bear canister, new warmer sleeping bag. The final box had food. After packing everything up, my bag felt like it weighed a thousand pounds. Right before we left, a hiker from Denmark called Price joined Harry and me. The three of us headed out ready for this new and exciting section.

As we walked the trail steadily gained elevation for an entire day, we climbed from 6,000 to 10,000 feet very quickly. Even though the hiking was difficult, I was happily distracted by the beautiful scenery that was around every corner. We celebrated our first day in this section, by making a fire at camp that night (a surprisingly rare thing on the pct). The next two days I climbed up and over two peaks. The first was right around the 10,000 foot mark and the second, closer to 11,000 ft. Each peak had snow on the top but it was easy to walk over and I didn’t even need my snow gear.

After the second pass,

I took a side trail and descended to a park, where my group hitched a ride into the town of Lone Pine. The ride down was the scariest hitch of my life. Not because the people were sketchy, but because I rode in the back of a pickup truck down a mountain road with a major drop off on one side. Luckily I made it down alive and am now preparing for the next section. The next stretch will be one of the hardest. I will climb Mt Whitney and go over the highest pass on the entire trail. Additionally the snow will be a major factor and cut my daily mileage down drastically. Even with all this I am excited for the adventures to come. 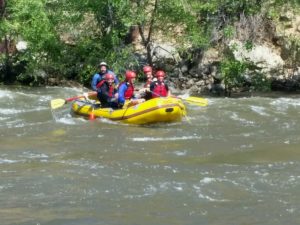 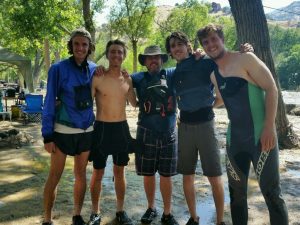 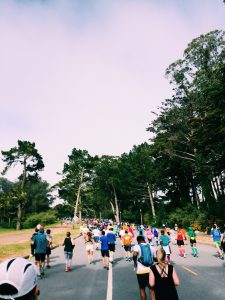 I’m not a runner, but when I heard about a 12k where the runners wear costumes and you run from one end of SF to the other I couldn’t resist. So I forked over the $90 to enter and bought a Hawaiian shirt from Goodwill. I didn’t know what to expect the morning of the race but upon I arrival, I saw people wearing everything from gorilla suits to nothing at all (literally). At the start of the race people throw tortillas at each other to kill time until their group is aloud to leave, so I definitely warmed up my arms. After my group was set free I actually ran the whole thing. The 7 1/2 miles went but fairly quick and at the end I was awarded my finisher medal. Let’s hear it for spontaneous adventures! 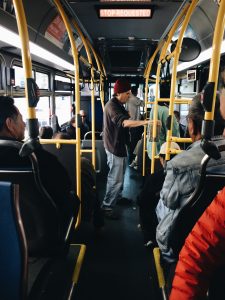