One of the highlights of the whole trail is climbing Mt Whitney. At 14,505 ft tall this is the tallest mountain in the continental US. It was a 17 mile round trip side trail to summit. Although many people skip it, for my group that was never even considered. I made it about 4 miles on the side trail after 10 miles of pct and camped at Guitar Lake. Guitar Lake was almost completely frozen and staggering mountains surrounded me in every direction. My friend Harry got a fishing pole at the last town and we spent the afternoon fishing for the golden trout that live in the area. The pole worked great and we caught two fish that were big enough to eat. 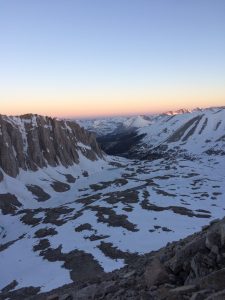 That night we feasted on rice and fish, with our minds on the mountain we would climb tomorrow. At 3 am our alarms rang and soon after we were on our way. After over 3,000 feet of climbing on snow we reached the top and jumped on the elevation marker. The view was spectacular and we spent the morning eating candy and looking at the snow covered mountains.

After a few hours we headed back down and pushed on toward camp. The next days were spent navigating water crossings and climbing passes. The final obstacle between me and my next town was Forester Pass. At 13,000 ft this pass is the highest on the entire trail. Not only that, but close to the top is an ice chute that goes down thousands of feet. Just like before, I woke up early and trudged toward the pass. Following footprints in the snow, I was able to make it up and over.

It would be all downhill from here (literally). The hard parts of this section were over. It took two more days of walking but we eventually made it out of the Sierra’s and down into the town of Bishop. After that section I am taking three zero days to let my mind and body rest before I head back into the mountains. This section is the hardest, but the beauty is more than enough reward.

2 Replies to “Into the Mountains”