The final town in Washington is called Stehekin. This tiny town is unique because there are no roads leading in or out of the town. The only way to get there is by foot, float plane, or ferry.

After arriving there, we went to the bakery. One of the most famous establishment on trail. Then, after a few cinnamon rolls the size of my face, I was asleep on the bakeries grassy lawn.

Out of nowhere Cupid said she was taking the ferry and hitching to meet up with Curry who was in the Hospital. This was not the first time I had witnessed one of the girls giving up a section of their hike to be with the other in a time of need. It was a true act of friendship and showed the bond that is formed between thru-hikers. So once again, it was just the guys.

That night in town I sat with Bee Keeper. We watched the sun go down over the lake and talked like old friends do. Over the past few weeks we had grown close. Unlike everyone else in the group, he had made it through the sierras. This meant that in the next four days he would be finished with the entire trail. As the day turned to night our conversation focused on his finish of the trail and re-entry to normal life. I thought that he would be ecstatic in his completion of the trail but he talked about how great his time had been and spoke about finishing as if he was bracing for a painful event. This struck me. I had recently been disappointed that I would not be able to finish in canada. I still had the Sierra’s to go back for and not finishing at the terminus was something that had increasingly bothered me up to this point. But now, sitting on the lake, my mindset shifted. Instead of disappointment I was happy. I still had a few more weeks of this grand adventure. In my drive to complete the trail I had missed this up until now. I now reminded myself that it is all about the journey not the destination.

Once the night had grown late we headed back to our camp. With my new mindset, I was happy to head out into this last section and the next morning we were hiking once again. 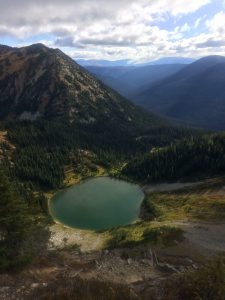 After leaving Stehekin we entered the heart of the North Casacdes. The end of Washington was every bit has beautiful and dramatic as I had anticipated.

Bee Keeper, Lt Dan, and myself had dubbed ourselves “The Singers”. A phrase Lt Dan always says, it refers to living the good life. Between our many days of laughter and adventure life couldn’t seem to get much better. Therefor “The Singers” were official. Our last days with Bee Keeper, climaxed the night before reaching Canada.

Instead of camping in a low elevation valley like normal, we slept on top of a pass. A giant rock face overshadowed us on one side and a grand vista took up the other side. The sun set turned the rocks a deep color of red and illuminated our view in a way that seemed cinematic. 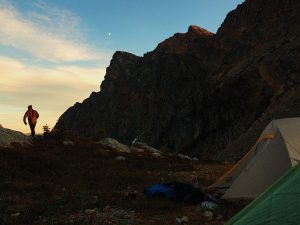 The high elevation made the night cold and windy and soon after the sun retreated, we all did as well.

The next day was our last all together. We hiked the remaining eleven miles to Canada in cheerful conversation about reaching this massive mile stone.

A few minutes after noon we rounded a corner in the thick washington forrest and saw the monument standing before us. Shouts of joy erupted from us as we howled and hugged the wooden monument. 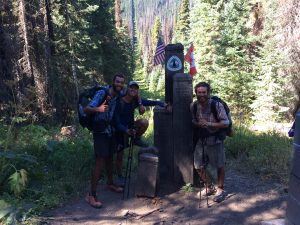 In the moment I was more happy for Bee Keeper than myself. For me it was just a mile stone. I had over 350 miles left but for him it was the final milestone.

The girls had rented a car and met us at the border. All together again we had a group photo sesh and then entered into Canada.

At Manning Park we shared our final meal together and in the parking lot Lt Dan gave Bee Keeper a moving goodbye speech. We all said our own goodbyes and then were on the road.

Bee Keeper would take a bus to Vancouver and fly home the next day. As for us, we started our drive back to the Sierra’s. My journey was not over just yet.