From Canada it was about a fifteen hour drive down to truckee california. We decided to break it up over a few days because the rental car we had was only under Cupids name.
Although our goal was just to make it to Truckee and resume the hike, we made an event out of the drive. It was our road trip. 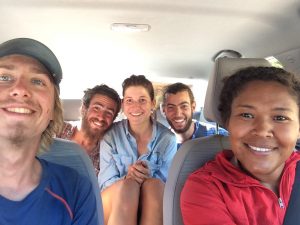 After saying goodbye to Bee Keeper in Canada, we drove down to seattle. Everyone tried with all their friends to find us a place to stay but we all came up empty handed. This meant finding the cheapest hotel possible. Unsurprisingly our hotel looked like a map on call of duty, set somewhere in the middle east. I might normally be apprehensive about staying in such an establishment but after hiking for the past four months my standards have seriously dropped. I welcomed the bed and hot shower, no matter the quality.

The next day we drove down to Ashland Oregon. The current talk of the trail had been the wild fires. I had been able to narrowly escape most, but while driving down, we were in smoke almost the entire way. These fires ran the entire length of the west coast. The entire day we drove in smoke but we eventually made it to ashland where planned to stay with a friend of curry and cupid named Zahara. Zahara owns a small shop in ashland that is focused on everything middle eastern/asian. The tiny shop was packed full of authentic dress and jewelry. Unsurprisingly, her house was exactly like the shop. I felt as if I was in another world. She was a very kind and gracious host and I thoroughly enjoyed my stay. The next morning we were off once again.

The car was to be returned in Reno Nevada, about thirty minutes from Truckee. Being back close to the trail we hoped to find a trail angle to stay with before hiking out, but had no luck. So we tried a new tactic, couch surfer. I had used couch surfer before on trail and had always had a positive experience. In Reno we found a host named Zen. He was originally from the south and made beans with corn bread. Having a taste of home-made southern food was an amazing reminder of home. Also at his house were other couch surfers who had just come back from Burning Man. Over dinner we all swapped stories of our recent adventures.
The next day we were on trail once again. This time, with the end in sight.