On the PCT there is a challenge to backpack 50 miles in a single day. When I started the trail I thought this was absolutely insane. That is the distance most backpackers do over 4-5 days. Trying to walking that far in a single day seemed crazy.

To a guy I was hiking with though, it didn’t seem so crazy. Lt. Dan was up for the challenge and because of my competitive spirit, I was sold on the idea fairly quickly.

The most popular place to do this from is Ollolie lake to Timberline Lodge. This might have something to do with the fact that timberline lodge is known for their incredible breakfast buffet. During the evening at Ollolie lake, Lt Dan and I planned out big next day.

At 1:15am our alarms rang and by 1:45am we were on the trail. Through the darkness we hiked for hours, only pausing briefly to look up and marvel at the stars. By the time the sun rose we had been walking for almost five hours and we hardly stopped till lunch. With 30 miles down we decided to take our big break. In the most magical act of trail magic I have seen thus far, a car camper just happened to be offering food to hikers at the exact spot we stopped for lunch. By this point I was already extremely tired and this made all the difference in the world. A hamburger and nap re-energized me and soon we were walking once again. 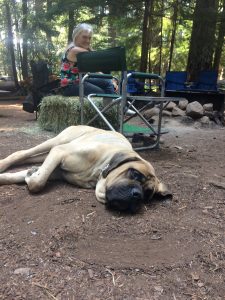 The hours faded by slowly and every mile seemed to grow longer than the last. By mile 40 I was exhausted.

The day was turning into evening and I stilled walked on. Feeling almost like a zombie, my brain stopped thinking and all I could do was put one step in front of the other.

To top it all off the last three miles of the day were a pretty decent climb.

In the darkness once again Lt Dan and I both kept on moving until finally, 19 1/2 hours of walking later, we reached camp.

This was by far the most difficult physical trial I have ever undergone and after finishing it, my pride in my accomplishment was substantial. My exhaustion was equally so though, so after a fist bump and a little dinner I crashed. Hard. With dreams of the breakfast that awaited me as my reward