While hiking the PCT I got in touch with a man named Britt Boone who lives in Montenegro. Britt owns a startup travel company in Eastern Europe called Meanderbug (meanderbug.com). After a few months of talking it was decided that I would come for three months and do a work-for-stay. A short two weeks after arriving home from the PCT I set out once again with adventure on the horizon.

Once of the main reasons for my visit was to help create a thru-hike in Montenegro, that follows the scenic Katun Road. This road goes through the north mountains of the country and our goal was to create a hut-to-hut hike. On this type of hike you are able to sleep in a bed and eat real food, but still hike every day.

I few days after I arrived we headed out. Never before done, this hike had a lot of unknowns but a shortly after starting we both realized the potential of this hike. The mountains were breathtaking and the cherry on top was the people. Mountain farmers and shepherds were scattered through the area and offered a unique cultural aspect to the hike. 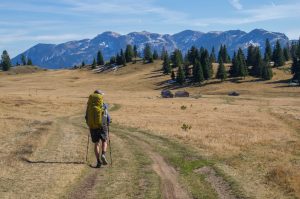 The first day we hiked about 10 km almost exclusively uphill. At this time of year daylight was not on our side so we were not allowed many breaks. Besides talking with a few locals and sadly denying their invitations for coffee, few breaks were taken. Shortly before sunset we arrived at our first Katun. This Katun village was high in the mountains but also in a giant grassy field that was shaped like a bowl, with hills rising up on all sides above the village.

Side note: Katuns are mountain houses generally occupied in the summer months by shepherds so their flocks can graze in the mountains.

Our Katun was owned by a mountain of a man. Montenegrins are already the third tallest peoples in the world and this man towered above the rest. Since this man spoke no English, Brit was my translator. Almost immediately after arriving he took us to a garden and we dug up fresh mountain potatoes. As we skinned them in the front yard, the other two men in the village brought out their guns and a can shooting tournament was soon in place. Expecting me to not be able to shoot they were all surprised when I knocked down the cans. After Britt told them I was from Texas the all shouted “cowboy!”. 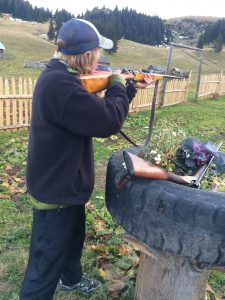 We shared a home cooked traditional Montenegrin meal, and headed to bed in our Katun heated by a small wood burning stove. The next day one of the men from the village offered to hike with us and show us a back-country route that was off of the Katun road. Despite being 70 years old this man lead us from memory through the mountains for half of the day. Only interrupted by a stop from boarder police patrolling the area, we made good time the first half of the day. The second half of the day was different… 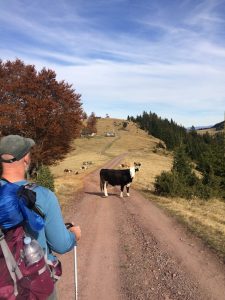 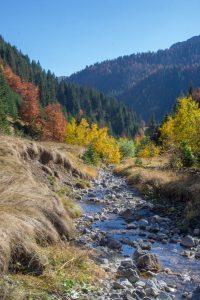 After the old mountain man turned around to go home, we continued confident in our navigation abilities. Ignoring our map, we decided to continue on this back-country route. This was not smart. As we walked we went down almost 3,000 vertical feet, off trail, and ended up in a giant canyon. With nothing else to do we were forced to find a way out. The only way was up so that’s where we went. At an excruciatingly slow pace we climbed, mostly with all fours on the ground, all the way out of the never ending canyon. Unlike the first day, we were not luckily enough to beat the fading sun and shortly after making it out, the sun had completely retreated. 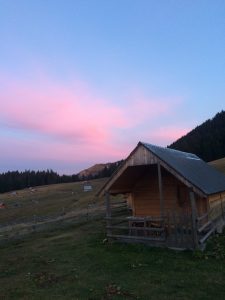 We brought tents and sleeping bags in case we weren’t able to make it one day and I was convinced we would have to use them. With the sun, the temperature also dropped very fast and we still weren’t at our Katun. If we didn’t make it, we would not only have an uncomfortable night, we would let down our hosts. They were expecting us and had spent the day preparing our food. Because of this we hiked on in the dark. Miraculously, Britt got cell service and we found out we were very close. Being night, we had our hosts pick us up and we were inside with warm food only shortly after not expecting to make it at all.

Exhausted from the day’s hike we both knew that this was the conclusion of our trip. With a good start we could get to work on our Katun-Road thru hike and so we arranged a taxi for the next day to take us back to our car.

Although we didn’t finish the hike we were able to recognize the potential this hike could hold and get a idea of the beauty and culture that surrounds it. In the upcoming weeks I will be working with Britt to create this hike. Stay tuned to see how it turns out!

(The blog post I did for Meanderbug is now out!) Check the link below.

Hiking the Katun Road – A Hut to Hut Adventure

8 Replies to “The Katun Road”