As we approached the trailhead at Donner Pass in Truckee I was amazed. I had been here before but did not recognize it. In June everything was snow covered and now there was nothing… Day hikers as far as the eye could see, happily trodded up and down the trail. The plan had worked.

With heavy packs full of food we headed out once again into the grand sierra.

The first day out the trail led up a very exposed ridge. The views were beautiful on both sides but a thunderstorm was on our heels. We could see the dark clouds behind us and moving in. Every distant roar of thunder was good encouragement to go faster than before. 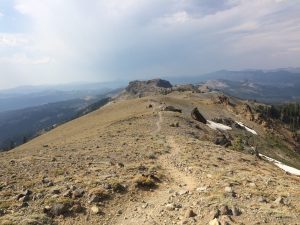 After a stressful hour of hiking we made it off the ridge. In the mess I had taken a wrong turn and gotten off trail. That meant lt dan and curry had gotten ahead of me thinking they were still behind. So when I got to where we said we would camp they weren’t there, thinking I had gone farther. So i hiked on as well hoping their ambition to catch me wouldn’t last long. Three miles later I found them at a camp.

Right before entering south lake tahoe, the trail passes by Aloha Lake. Named for the many stone islands scattered around it, this was the first of many sierra alpine lakes we would pass. The water was so clear we had to swim despite the fridges temperatures.

After getting into town we got connected to a trail angel named Rob who worked as a pit boss at casinos. Surprisingly we were the first thru-hikers to contact him this year so he was very excited to have us. He cooked us two homemade meals, made us sandwiches to go and drove us back to the trail.