After my thirty eight mile day,  I set up camp at the first open place I saw. It was on a ridge about fifty feet above the valley floor. I laid down to sleep with good weather and a belly full of McDonald’s, but my sleep was cut short. Two hours after crawling into my tent the wind picked up. Then it started to rain. Then the wind picked up even more. Eventually the wind and rain were so strong, water was getting blown into my tent from the side. That is, when my tent was still standing. About every hour a gust of wind would be so strong that it would blow my tent completely over and I would have to fix it, trying to not get soaked in the process. This made for a long night with sleep nowhere to be found.

In the morning the rain let up but the wind had blown a fog in that was so thick, visibility was about twenty feet. So I threw all my stuff into my backpack and started walking. My next resupply location was in Wrightwood, about twenty five miles from where I slept. As I trudged toward my goals I got word that a snow storm was coming in and temps would be in the low twenties. Having already suffered through a few chilly nights I knew that was not something I wanted to take on. Upon arrival to Wrightwood some hikers offered to let me sleep in a cabin they rented. Instead of paying $60 for a hotel room I could pay $20 for a cabin. Things were looking up, that is until I looked down at my wallet. In the chaos of the night hike and storm I had lost my debit card….

I had $40 in cash but that would only cover my room for the next two nights and I was out of food. A sort of panic sunk in as I tried to think of the logistics of getting money and a new card. All while moving from day to day. After a few deep breaths I figured out how to get a new card but that would take a week. That’s a week without money or food. I felt like I was getting knocked down, standing back up to only get hit again.

After seeing my struggle, my hiking buddy Harry offered to loan me money until my card arrived. A true blessing. So I was able to buy food and if all goes will I will be able to support myself again soon enough.

I think having rough days is part of the process. The uncertainty of it all is what makes it an adventure. Although horrible in the moment, these are the events in life we look back on and laugh about. So for now I continue on my path to Canada, taking each day as it comes. -Noel Nelson 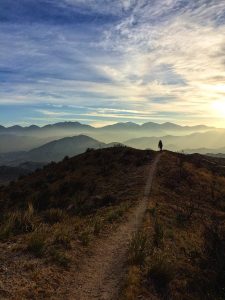 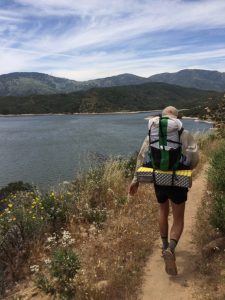 Up to this point, my mileage each day had been steadily growing. I started with 15 mile days and slowly work my way up to 20 mile days and eventually even did a few 25 milers. I never thought the morning I woke up at the hot spring, I would do my longest day yet. by a lot….

From the hot spring, interstate  I-15 was about 35 miles ahead. At this highway a McDonald’s is located near the trail. This is a big deal for hikers struggling with “hiker hunger”. My original plan for the day was to do 18 miles and stroll into McDonald’s the next day for lunch, except by lunch time, I had already hit the 18 mile mark. At that point I knew it was possible to make it all the way. So I went for it. Along the way there were incredible vistas and I had good company. 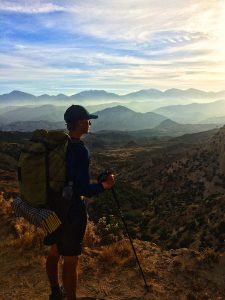 Finally, at around 8 pm the golden arches were in sight. I’ve never been a true McDonald’s fan but I can say that moment was different. I went in and ordered a double quarter pounder with cheese, a large fry, large drink, and twenty nuggets. I finished them all.

After dinner we ended up having to walk another three miles in the dark to find a campsite.That made for a 38 mile day. I set up my tent and went to sleep happy and full. All was well, or so I thought… -Noel Nelson