This time of year in Oregon is beautiful. They days are nice and long and up in the mountains the temperatures stay cool. The only down side is, it’s forrest fire season. This is a problem we don’t have to deal with in San Antonio, but it is a real issue out here.

From the church camp we hiked on noticing the increasingly smoky air around us. In the Mt Jefferson Wilderness that lay only a few days ahead a wildfire had been burning. 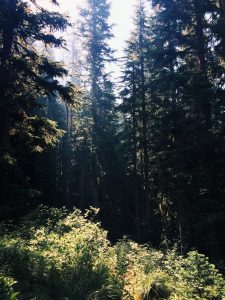 The fire grew quickly despite the forrest service doing all they could to subdue it. We learned that it had even reached the PCT so the trail had been closed ahead of us. An alternate had been set up, but for only 10 miles of trail being closed, the alternate was 40 miles of road walking.

As we approached the closure the smoke got so thick it cut visibility down tremendously and made breathing rather difficult. I had to put a damp rag over my face to breath comfortably and finally reached the trail junction where we split. As we approached, the forrest service said

they were going to close even more miles of trail because of how fast the fire was growing.

I hated having to miss the 10 miles but I was lucky to make it through before the closure got even bigger.

We arranged a ride to get around the alternate with Peanut’s boyfriend who lives close by. He brought us to where the trail resumes and that night we camped on a lake and he cooked elk stakes. A pretty good celebration of not dying in the forrest fire.

3 Replies to “Where there’s Smoke”